From Titicaca to the Golden City

From Titicaca to the Golden City
A Race Against Extinction

Scientists worldwide have warned that the world is on the verge of a sixth mass extinction. Now, with many species’ populations in rapid decline, we take a look at the role of zoos in helping to restore balance in our ecosystems, warts and all.

Recent years have seen zoos and other wildlife exhibits come under increased scrutiny from animal rights activists and organisations. Many who have stood in support of zoos claim that the animals held captive serve as ambassadors for their species and that offering visitors an opportunity to observe them in the flesh helps to instil a greater sense of empathy. Another common argument is that, for the average person, experiencing a wild encounter with many of the species that are so easily accessible in places like Prague Zoo is unfeasible.

The number of compelling wildlife documentaries now available on demand – including those which embody a strong conservation message, such as Netflix’s Our Planet – have helped some activists to build a case against the animal ambassador theory. This, together with a profusion of zoos, wildlife parks and “sanctuaries” being exposed for their poor animal welfare standards over the last decade, has led to growing pressure. Zoos are continuously being forced to evolve with the new wave of awareness raised by activists, with many opting to partner with wildlife charities and become involved in conservation programmes. These actions and initiatives have contributed toward debunking allegations that all zoos exist purely for profit.

In 2017, Prague Zoo was ranked the world’s fifth best zoo on the popular global travel portal TripAdvisor. Of course, review websites such as TripAdvisor don’t necessarily take important factors such as animal welfare standards or conservation efforts into account, instead providing insight into visitor experience. However, it doesn’t take much digging around to discover that there has been a change of mindset among the general public over the last few years. With many reviews acknowledging the zoo’s exceptional animal welfare standards and highlighting the plaques which provide detailed conservation information on each species, it is clear that attitudes toward wildlife have improved.

Perhaps the key to Prague Zoo’s success is the institution’s involvement in many important conservation programmes over the past few decades. Take their role in the revival of the Przewalski’s horse as an example. The species was only discovered in 1881, and by 1970 had been driven to extinction in the wild at the hands of humans. The zoo embarked on a breeding program to help save the species and later joined the Return of the Wild Horse Project (WAZA) in 1998 and 2000, helping to relocate four of its Przewalski’s horses to their natural habitat in the Mongolian areas of Takhin Tal and Hustain Nuruu. The introduction was a great success, but with the species on the road to recovery, support from others initially involved in the programme gradually petered out. However, with a mission to ensure that the horses would survive in the wild long-term, Prague Zoo intensified its efforts, partnering with the Czech Army, who helped transport 18 mares and one stallion to Mongolia between 2011 and 2015. Following acclimation, the Przewalski’s horses joined wild herds, slowly helping to increase genetic variation, with some of the mares raising their own foals only a year after arrival.

Like the Przewalski’s Horse, when it comes to endangered species, we tend to empathize more with larger mammals such as polar bears, tigers, and orangutans – all of which feature at Prague Zoo. Whether acting as “gardeners of the forest” or keeping food chains in check, these species have a vital role to play in maintaining well-balanced ecosystems. That said, every species on this planet serves a purpose in the circle of life. While the general public focuses its attention on the bigger, cuter animals, institutions like Prague Zoo are working together with scientists to explore some of the smaller critters that help to indicate the health of entire ecosystems, rather than just individual species.

Due to their ability to live in two different environments (land and water), amphibians are widely regarded as the best indicator species. Their thin, permeable skins – which are sometimes breathed through – are capable of absorbing various diseases, radiation, and toxic chemicals. Therefore, environments abundant in amphibians, including frogs, toads, and newts, are considered to be the healthiest.

It’s fairly common knowledge that our planet is currently under great threat as a result of human impact. Despite this awareness, pressing issues such as melting sea ice, deforestation, and coral bleaching continue to occur at the expense of wildlife and, indeed, our own species. One area of the planet that has been hit hardest by human interference is the richly biodiverse Lake Titicaca. Situated between Bolivia and Peru, this extensive body of water is not only the largest freshwater lake in South America, but the highest of the world’s large lakes. It is home to more than 530 aquatic species, several of which now face a grisly fate without, somewhat ironically, human intervention. One such species is the enormous Titicaca water frog, an animal that recently arrived at Prague Zoo.

The critically endangered Titicaca water frog is endemic to the lake and plays a pivotal role in restoring balance within the ecosystem. Once a common resident in Titicaca’s ancient wetlands, the frog’s population has been decreasing rapidly in recent years due to water pollution, poaching, and the introduction of alien and invasive species by humans. To tackle the issue, Prague Zoo, along with other wildlife institutions located in Europe and North America, has joined a programme which aims to create an insurance population in captivity. The programme was initiated following a successful breeding programme at Denver Zoo.

Titicaca water frogs are remarkable in many aspects, including their ability to breathe almost exclusively through their skin. They are entirely aquatic and have adapted to their high-altitude environment by evolving excessive amounts of skin to help with respiration in the cold, poorly oxygenated waters. Distinct skin folds are present over most of the frogs’ large bodies, leading them to be jokingly referred to by some as the Titicaca scrotum frog!

Visitors will be able to get a glimpse of these rare amphibians when a small Titicaca exhibition opens at Prague Zoo this spring. The goal of the exhibit is not only to allow guests an opportunity to come face-to-face with one of the planet’s most endangered species, but also to pass on information about one of the world’s most important ecosystems. Conservationists believe that by raising awareness of the plight of the frogs and others species, collective compassion toward animals and their environments among the global community will slowly ensue.

There is still a valid argument which insists that all animals deserve their right to freedom. In a perfect world, void of the human-caused problems that scientists predict will cause the world’s sixth mass extinction, there would be little moral objection to this sentiment. But in the present day, we must take the necessary steps toward preserving the beautiful array of flora and fauna with which we coexist. By fighting the conservation cause together, animal activists, wildlife charities, zoos, and even the general public can help to ensure our ecosystems and fellow earthlings will flourish once more, eradicating prophecies of a desolate world without wildlife.

More information on the new exhibition can be found here! 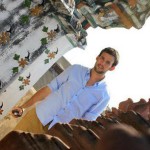