Vladimír Čížek – An Artist and His Love…

Recently Oko! Magazine had the chance to meet creative spirit and globetrotter Vladimír Čížek. In the early 80s, when usually only government members would be sent to the Western world, Vladimir was presented with a unique opportunity to travel to New Zealand as a trade representative for the Czech embassy. Realising he had been given a chance that very few people in his position at that time had, he accepted the task and also set out to travel and explore as much as he could of these faraway islands in the South Pacific.

While living in the New Zealand capital, Wellington, Vladimír gained an interest in the traditional art of whalebone carving (whakairo in Māori).  After spending countless hours reading up on the discipline and visiting many exhibitions, fate allowed him to meet a gentleman named Owen Mapp, who was one of the first contemporary bone carvers in New Zealand. Owen gave Vladimír a few small pieces of whalebone and began teaching him the art of carving.

Vladimír soon became a talented and highly skilled carver and expanded his knowledge through meetings with other prominent carvers such as Norman Clark, Stephen Lance Myhre, Don Salt, and Brian Flintoff. By 1999, with the help of his friend Owen, Vladimír had produced enough carvings to be displayed in an exhibition on contemporary New Zealand carvers in the Museum of Bohemian Paradise in Turnov. In 2007, Owen Mapp and Stephen Lance Myhre travelled to the Czech Republic to share their carving skills at a jade workshop at the art school in Turnov.

A few pieces of whalebone are part of Vladimir’s collection in Prague, but due to the preciousness of the material and the export and import limitations of the communist era, he has used mainly cow bones for his carvings, or when possible, more exotic specimens such as giraffe and ostrich bones.

He regards three specific pieces as holding significant meaning for him. “Manaia” is Vladimir’s personal amulet, which he wears every day. It is a copy of a museum piece that captivated him while he was in New Zealand. It is usually depicted as a bird’s head, a human body, and a fish’s tail and is said to unite the sky, earth, and sea. “Heimatau” is originally a fish hook, but was developed into an amulet. It is the symbol for good luck in fishing as well as travelling. Lastly, “Tiki” is the most popular figure in carving. It represents the first man created by God. In fact, all carvings resembling the human form are called Tiki.

Vladimír says he feels a special connection to New Zealand and transmits his love for the nation through workshops and tours both in Europe and in New Zealand itself. According to him, the country is known and revered for its beautiful scenery, exotic animals, plants, fjords, volcanoes, hot springs, beaches, mountains. and more. His favourite part of New Zealand is Tongariro National Park, located in the centre of the North Island. Part of the park’s beautiful scenery is the volcano which was used as Mount Doom in the Lord of the Rings films.

The long-term project Vladimír has planned for the future is to establish a sightseeing tour of New Zealand combined with wine tasting. You can find Vladimir’s unique work by visiting www.novyzeland.info. 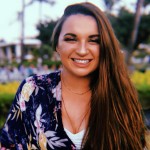